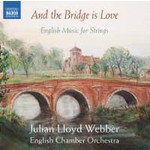 This wide-ranging programme of English music for strings includes the world première recording of Howard Goodall's moving And the Bridge is Love, in which Julian Lloyd Webber plays cello, and of William Lloyd Webber's The Moon, only performed for the first time in 2014. There are also established classics such as Elgar's Introduction and Allegro, Op. 47, as well as novelties in the case of the never-before-recorded arrangements by Elgar's friend and biographer W.H. Reed of the two Chansons.

From the late nineteenth-century British music experienced a flourishing of compositions for strings, spearheaded by the genius of Elgar. His Introduction and Allegro, Op.4 is one of the masterpieces of the genre, but smaller pieces such as the two Chansons - heard in never-before-recorded arrangements by his friend and biography W.H. Reed - distill his lyric essence and are performed by one of the world's leading musicians, Julian Lloyd Webber. He also plays cello in the world première recording of Howard Goodall's moving And the

Bridge is Love. He has also included the poetic Moon written by his father, William, and unperformed until 2014.

"as a conductor, he evidently has the ability to make a difference to collective performance-level (the English Chamber Orchestra plays characteristically and vividly at every point) while not getting in the music's way - a combination of qualities nicely suited to this line-up of string works." BBC Music Magazine, April 2015 *****

Goodall, H: And the Bridge is Love
World Première Recording

Walton: Passacaglia - Death of Falstaff and Touch her soft lips from Henry V

Mario Lanza: The Best of Everything

Slava! The Art of Rostropovich (3CD)