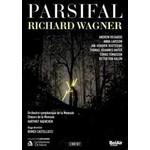 Parsifal is a strange and enigmatic work. At the end of his life, did Wagner wish to celebrate asceticism, which he himself had never practised? Did he fall upon his knees before the Cross, as claimed by Nietzsche? And what does the secret society of knights based on pure blood signify, desperately waiting for the saviour to regenerate it? What is the true nature of the opposition between the worlds of Klingsor and the Grail? What can Parsifal tell us today? In his artistic will and testament, Wagner condenses his moral idea of the world and returns to the roots of love and religion - to the very heart of art according to him. With the participation of conductor Hartmut Haenchen who is passionated by the score, Italian stage director Romeo Castellucci proposes an original reading of this brilliant work and explores the essence of Wagnerian 'Kunstreligion' in a different light.

"This is an impressive but wildly idiosyncratic account of Wagner's last drama, at any rate from the visual and dramatic point of view...Fortunately the musical side of things, under Hartmut Haenchen, is consistently at the highest level...And he has a fine set of soloists...if you think you know Parsifal well, get this." (BBC Music)

"Haenchen directs an occasional over-fervent but generally well-paced reading, and the singers are excellent. In his final exhortation to the assembled company, Andrew Richards crowns an account of the title-role that is appropriately forceful without turning blustery." (Gramophone)

"the musical performance is superb. The performers all operate from a base of sound musicianship, guided by the lyrical, immaculately controlled, unfailingly sensitive conducting of Hartmut Haenchen...Richards and Larsson make memorable role debuts, the tenor offering unfailingly fresh, firm and powerful tone...[Larsson's] singing in the seduction has true allure." (International Record Review)