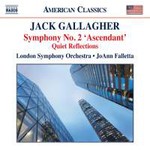 Jack Gallagher continues his association with the London Symphony Orchestra conducted by JoAnn Falletta with Symphony No. 2 'Ascendant,' a robust, colourful work of dramatic contrasts and expansive architecture that seeks to express the aspirations and strivings of the human spirit. Quiet Reflections is a calm, serenely lyrical meditation which evokes a sense of longing for past tranquility. Gallagher's previous Naxos release Orchestral Music (8559652) with the LSO conducted by JoAnn Falletta was awarded five stars by BBC Music Magazine and hailed as "fresh and exuberant" and for "its explosions of sound and colour" by Gramophone.

The release of Jack Gallagher's Orchestral Music (8559652) in 2010 aroused a great deal of interest, with Audiophile Audition describing his Symphony in One Movement: Threnody "truly a work of genius", Gramophone summing it up as "fresh and exuberant, Jack Gallagher's music speaks proudly of his country's cultural values in positive, eloquent and healthy ways… The LSO couldn't sound finer". Furthermore "the programme gets Rolls-Royce treatment from JoAnn Falletta and the London Symphony Orchestra" (BBC Music Magazine), and Gallagher is "one of JoAnn Falletta's best discoveries in her continual search for underrated American composers" (Buffalo News). Composed between 2010 and 2013 and recorded here by GRAMMY® winning producer Tim Handley, the second symphony stands as a vitally energetic continuation of this success.