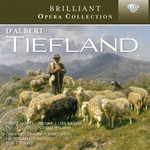 s.Considered the composer's masterpiece, Eugen d'Albert'sTiefland tells the story of Marta, a poor young woman who is the mistress of the wealthy local landowner Sebastiano. Sebastiano is about to marry an heiress, and plans to have Marta marry his shepherd Pedro, so that he may keep her as his mistress nearby. However, his plans go awry when Marta actually falls in love with Pedro, and the opera ends in a final, tumultuous scene as Pedro stabs Sebastiano and makes a dramatic escape with Marta up into the mountains.

D'Albert based the opera on the popular play by the Spanish writer Àngel Guimerà, Terra baixa. The suffocating atmosphere of the Catalan lowlands is set against the heightened emotions of the main characters, with D'Albert expertly adding touches of local colour to enhance the sense of realism. The final scene, depicting the couple's triumphant flight from the lowlands to the highlands, has a mystic, mythical feel, reminiscent of Wagner, whom D'Albert was known to have taken inspiration from.

This recording features a stellar cast, including Theo Adam and Siegfried Vogel. It garnered high praise on its initial release, with Gramophone magazine praising the young couple - Heinz Hoppe and Hanne-Lore Kuhse - for knowing "how to be brashly melodramatic without being vulgar", also noting that Paul Schmitz's conducting is "unapologetic and fluent". Supported by the world-class Chor der Staatsoper Dresden and the Staatskapelle Dresden, this too-often sidelined opera showcases D'Albert's flair for compelling theatricality.

A gem from the vaults of the East-German archives: the opera Tiefland by D'Albert.
Eugen d'Albert was a pupil and protégé of Franz Liszt, he embarked on a successful career as a piano virtuoso. As a composer he was deeply rooted in the German culture, and fell under the spell of Richard Wagner. As a conductor he was Kapellmeister in Weimar.
The opera Tiefland is d'Albert's masterpiece, it is regularly staged, and its late romantic Wagnerian language never fails to impress and enchant.
A stellar cast in this production from 1963: Theo Adam, Siegfried Vogel, Heinz Hoppe and Hanne-Lore Kuhse, the glorious Staatskapelle Dresden conducted by Paul Schmitz.
The booklet provides liner notes on composer and music, the libretto is available on www.brilliantclassics.com.

Other information:
Recorded in 1963 in Dresden, Germany.