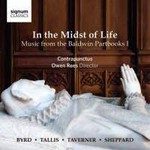 BYRD / MUNDY / PARSONS / SHEPPARD / TALLIS / etc
In the Midst of Life: Music from the Baldwin Partbooks I
Contrapunctus, Owen Rees

Shortlisted for the Gramophone Early Music Award in 2014, Contrapunctus releases an album of motets from the Baldwin Tudor partbooks, on the theme of mortality. Conducted by Owen Rees, the album includes Sheppard's epic 'Media vita' and works by Byrd, Parsons, Mundy, Teverner, Gerarde and Tallis, with Contrapunctus's own reconstructions of the missing tenor parts.

"The singing throughout is consistently full-toned and focussed, but essentially for this repertoire constantly ready with expressive crescendos and decrescendos to mark textual changes in mood. With its nine highly experienced singers (boosted to ten for the larger works) Contrapunctus is the ideal group for this superb repertoire, and I look forward with eager anticipation to future CDs in this series." (Early Music Review)

"Rees's choir brings an intensity of sound and dramatic dynamics, in music that contemplates the pain of death in ecstatic elation and sublime devotion." (Sunday Times)

"The quality of this recording is likely to set you on a search for more music from this period....this is another example of the very high quality of current performances of renaissance music." (MusicWeb April 2015)

"Borrowing its title from the openings of the Nunc dimittis, the subject here is mortality and fear of the Day of Judgment. Rees's accompanying notes tell a fascinating story of the survival of these partbooks. Whether you listen in Lenten penitence or in general hope of spiritual balm, the message is universal, the singing superb." (Observer)

'Owen Rees's interpretations are revelatory and even visionary. Witness the subtle dynamic shading he applies to William Mundy's Sive vigilem and the very finely judged pacing of the drive towards the climax in Theodoricus Gerarde's magnificent setting of the same text.' BBC Music Choral & Song choice August 2015

'Their debut was shortlisted in last year's Awards - their second release is just as accomplished; each of these powerfully contemplative works beautifully shaped and sung.' (Gramophone Editor's Choice May 2015)