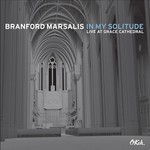 Branford Marsalis
In My Solitude: Live At Grace Cathedral (LP)

Branford Marsalis is one of the most revered instrumentalists of his time. The three-time Grammy Award® winner has continued to exercise and expand his skills as an instrumentalist, a composer, and the head of Marsalis Music, the label he founded in 2002 that has allowed him to produce both his own projects and those of the Jazz world's most promising new and established artists.

Branford Marsalis is one of the few illustrious Jazz artists who have performed at Grace Cathedral since Duke Ellington helped consecrate the cathedral in 1965 with his Concert of Sacred Music. Marsalis gave a performance of both composed and improvised music. He played a solo work written for oboe by C.P.E. Bach, solo saxophone pieces by Steve Lacy and Ryo Noda, and a beautiful version of Hoagy Carmichaels 'Stardust'. All of these pieces are connected by improvisations from Branford, which keep the music of various genres flowing and hold the album together.

Leader of one of the finest jazz Quartets today, and a frequent soloist with classical ensembles, Branford has become increasingly sought after as a featured soloist with orchestras around the world.