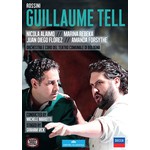 The William Tell legend of patriotic and political intrigue in 14th century Switzerland is interpreted by Graham Vick as a timeless class conflict with dramatic and unforgettable images.

A "perfect cast" is conducted with "verve and intensity" (Opera Today) by the brilliant young Italian Michele Mariotti.

Also includes:
Rossini: The Making Of William Tell - Behind The Scenes

"I cannot imagine a tenor today better equipped to sing this role than Juan Diego Florez, and he is indeed magnificent. The fact that he allows the high notes to be part of the vocal fabric rather than show-stopping moments is how Rossini wrote them-Florez's sense of the musical line is superb. Of course he grandstands, but here he also seems genuinely involved in the character and drama, unlike, say, when he sings Arturo in Puritani, which is just a swashbuckling display of dizzying heights. And he has tamed some of the nasality of his tone; the sound is rounder and warmer than before. Quite a brilliant performance." ClassicsToday Aug 2015)