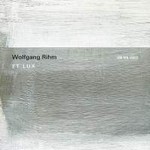 The hour-long piece is dedicated to The Hilliard Ensemble and the Arditti Quartet who gave the world premiere in Cologne in November 2009 and its UK premiere later that month at the Huddersfield Contemporary Music Festival. This pairing of a vocal group and a string quartet specializing in early music and contemporary music respectively is replicated by the artists on this ECM disc - the Cologne-based Minguet Quartet and the Belgian early music group, the Huelgas Ensemble whose founder, Paul van Nevel, conducts the recording.

'Et Lux' emerges as if from centuries ago, and reflects upon the musical processes that have shaped it, including the ritual of the requiem: "What we have is not music remembered but music remembering." It incorporates text fragments of the Latin Requiem Mass, which appear as components of a progressively realized whole. "Great significance is displayed by the reappearance of specific groups of words, for example 'et lux perpetua luceat' (and let perpetual light shine upon them). Through circling reflection the comforting yet disturbing meaning of the words may become perceptible."

Reviewing the premiere performance the Frankfurter Allgemeine Zeitung praised the work's interwoven musical and linguistic elements while the Daily Telegraph said of its UK premiere: "Beautifully paced and very moving". 'Et Lux' was recorded in February 2014 in Antwerp. The CD booklet includes an introductory statement by Wolfgang Rihm, and liner notes by Paul Griffiths and Wolfgang Schreiber.

"Tropes waft in from across the ages: this music treads the line of tangibility, with sudden rushes of anger or fondness and the messy half-memories that come with grief...van Nevel doubles the vocal parts to create broad, generous textures that sound lovely and lush against the strings' icy clarity - all qualities that ECM's engineers are expert at capturing." (Guardian)