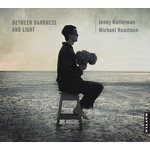 Between Darkness and Light is a celebration of 19th and 20th century art-song from two of our finest classical musicians.

Liner notes by Jenny Wollerman
Between darkness and light is where the poet Rabindranath Tagore places 'the silent meeting of soul with soul … where the infinite prints its kiss on the forehead of the finite.' In his essay, The World of Personality (1917), Tagore acknowledges the transitory nature of the world and its relational aspect to time and space, heightening my own consciousness of the continuous diurnal cycle that rules our lives and influences our moods: throughout our lives we relentlessly move between the dark and the light.

Le soir, silent noon, boundless evening, die Nacht, a hidden moon, der Frühe, sunlight, clair de lune … such metaphors are the inspiration for many of the most treasured art songs of the 19th and 20th centuries. A desire to explore the affective influence of light on us was my starting point for the concept that became 'Between Darkness and Light'.

The process started in 2011 in a meeting between Michael Houstoun and the Director of the Wanaka Festival, Philip Tremewan. A collaboration between Michael and me was proposed for the 2013 festival: what might this entail? Over the following year the initial concepts were developed into what became a semi-staged song recital with solo piano interludes. Tony Rabbit joined us as designer-director, and his exquisite conceptual lighting shaped the themes of the show while deftly accommodating my desire for full 'surtitle' translations to enhance the visual and aural effects of the performance.

So what do the selected poems, these songs, portray? Our poets drift, as we do, between darkness and light, hovering, reluctantly slipping from night to day and returning again to darkness. They revel in the light of day, and are subsequently found joyously communing with le demi-jour, the half-light.

For Emily Dickinson 'sunshine was a sweet place', while Hermann Hesse, like a tired child, yearns for sleep and dreams, wanting 'to soar in free flight, unseen ... in the magic realm of the night'.

We meet Paul Verlaine's lovers who rejoice in L'Heure exquise, or embrace in the seclusion of a nocturnal garden love-nest in En Sourdine. Others poets, such as Hermann von Gilm zu Rosenegg in Die Nacht, are fearful of the night ('she may steal you from me'), or spend it wracked by nightmares as in Eduard Mörike's In der Frühe. Certainly darkness intensifies fears, and sorrows, yet here it is also the stuff of dreams, of secret love, the gift of a hidden moon, and moonlight, 'sad and beautiful'.

There is always the promise of daybreak 'wiping away the tears' with 'waves of sunlight'. Anna Akhmatova's sunshine gives love and life, which winter's darkness has closed down to a memory. For Klaus Groth the intense cool light of 'Your Blue Eyes' is a panacea, while in Charles Baudelaire's Recueillement the whole realm of life is uncovered in his conversation with his own sorrow, as night falls over the city 'like a long shroud trailing to the East'.

O Boundless, Boundless Evening, the last song composed by Samuel Barber, can be read as an acceptance of approaching death, and our lives can be seen as tracing a bigger arc than the quotidian: born from darkness into the glare of life's light and its inherent enlightenment, then at last returning once more to darkness in death. Perhaps, as in John Henry Mackay's Morgen!, there also shines hope, a dream of reuniting with one's beloved on that path to the shore of 'crossing over': in a blaze of golden sunlight on 'this sun-breathing earth'.

Revisiting these songs as I prepare the translations for publishing, I am struck by the depth of insight contained within these poetic texts. The challenge of crafting an English text that reflects the multiple levels of meaning in a masterpiece such as Baudelaire's Recueillement is insurmountable, yet I feel that a translation made by the singer herself, reflecting on the implications of the musical setting, can provide not only a sense of Baudelaire's subject matter for someone unfamiliar with the language, but move beyond this to share a personal reading of the text, the one on which the interpretation of the song in performance was based. This is the impetus behind my translations and, indeed, all of my performances as a singer, particularly of art song: the communication of a personal experience through the miniature glass of the song form.

Having the opportunity to share this process musically in both performance and recording with wonderful Michael Houstoun, whose brilliance as a pianist is matched by his personal warmth and generosity in collaboration, has been a highlight of my musical journey.

Loving thanks to Michael, Rabbit, Philip, Hedda and all those involved in the creation of the show and of this recording, including Ken and Steve ... and once more, Michael.