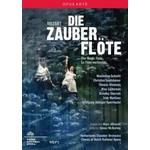 Since its premiere in a tiny suburban theatre in Vienna, Die Zauberflote has delighted audiences young and old for over 200 years. Mozart's Singspiel seamlessly alternates seriousness and jollity, and combines philosophical ideas with a fairytale world of wondrous animals and magical musical instruments.

Emanuel Schikaneder's original production was theatrically inventive, and this new interpretation from director Simon McBurney emulates that in fresh and current terms.

Fusing music, technology and stagecraft, this exciting production gives Die Zauberflote a refreshing new treatment that is both thrilling and simple in its approach.

"This is a people's Magic Flute which restores the tale's naive power. It is sparkily conducted in light, historically aware tempi by Marc Albrecht, and acted and sung as a tightly worked ensemble piece....Subtle touches ease what we now find chauvinist and racist in the original...Ingenious. Recommended." (Gramophone)

"Freshness of vision, emotional openness, genuine ensemble theatricality, a robustly physical sense of adventure humorous and serious (but never portentous) by turns, and an underlying directorial trust in Mozart's music...among the most rewarding experiences of the opera I've had in nearly five decades of Magic Flute encounters." BBC Music Five Stars

"This cast would grace any leading opera house. They are uniformly good at putting the characters across, as well as offering fine singing. Schmitt's Tamino has the grace and power for that taxing tenor role, and the top notes of the Queen of the Night (Martinez), and the bottom ones of Sarastro (Sheratt), register perfectly, as does the rest of their vocal ranges. If there is one musical highlight, so enchanting I watched it again as the sort of instant encore a disc permits, it is the Act 1 duet for Papageno (Oliemans) and Pamina (the delightful and vocally outstanding Landshamer)." (MusicWeb Sept 2016)