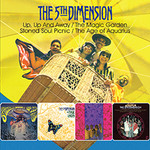 The 5th Dimension
Up, Up And Away / The Magic Garden

Fresh sounding vocal harmonies, stellar musicianship, exceptional song writing and unique production were the hallmarks of THE 5TH DIMENSION. Up, Up And Away, The Magic Garden, Stoned Soul Picnic and The Age of Aquarius were the 4 key albums that defined their unmistakable sound and subsequent success. Discovered by Johnny Rivers and signed to his Soul City label in 1966, the group struck gold with a young songwriter, Jimmy Webb. Their version of his classic 'Up-Up And Away' (amongst many others) defined a sound and an era that still resonates. Producer Bones Howe added a sweeping, orchestrated production to the group's soaring, seamless harmonies, placing them high among the best purveyors of California-style sunshine pop.

In addition to Webb, with songwriters like Laura Nyro, John Phillips and Ashford and Simpson the group was never short of quality material. With the legendary LA Wrecking Crew backing them (Hal Blaine, Tommy Tedesco, Larry Knechtel, Joe Osborne etc) hit after hit after hit came from these four LPs. 11 Billboard Top 40 hits from 1967 to 1969 are all here, including 'Up-Up And Away', 'Go Where You Wanna Go', 'Carpet Man', 'Paper Cup', 'Sweet Blindness', 'Stoned Soul Picnic', 'California Soul', 'Blowing Away', 'Workin' On A Groovy Thing' and the #1 smash hits 'Aquarius / Let The Sunshine In' and 'Wedding Bell Blues'. With superb audio, five bonus tracks, color booklet, rare photos and detailed liner notes.