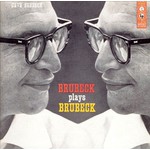 Dave Brubeck has had a strikingly original style ever since he appeared on records, avoiding the usual Bud Powell runs and instead expressing his training in classical music and his interest in polyrhythms and polytonality while never forgetting to swing. On his first solo piano record, Brubeck not only plays quite well but introduces such new compositions as "In Your Own Sweet Way" and "One Moment Worth Years" in addition to performing a remake of "The Duke." - AllMusic