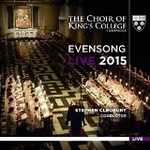 Evensong Live 2015 is drawn from the best of the Choir's weekly webcasts recorded during the preceding academic year (2013-2014).

The recordings are made during real services, using a state-of-the-art recording system concealed in the roof, vestry and organ loft, with microphones suspended above the choir stalls and organ. Webcasts are posted every Saturday, and are available online at: http://www.kings.cam.ac.uk/choir/webcasts.html.

This album includes a selection of the best performances captured during the year, as selected by the Choir's Director of Music, Stephen Cleobury. The Choir at King's performs evensong six times a week, in addition to Sunday eucharist or matins, furnishing the liturgy with music on a daily basis.

This tradition has fostered many of the greatest choirs, singers and organists in the world.

These eighty minutes provide a cross section of some of the everyday music making that happens at King's, capturing the atmosphere and acoustic of the Chapel. It serves as a snapshot of the choir at a specific moment in time, and presents evensong as one of the jewels of our national heritage, not a relic, but a living and breathing part of our culture.

This release joins the label's other critically-acclaimed recordings. Mozart Requiem Realisations received ****Performance ****Recording from BBC Music Magazine. The celebrated Fauré Requiem received Recording of the Month from BBC Music Magazine, a **** review from Choir & Organ, Outstanding from International Record Review and No. 1 in the UK Specialist Classical Chart.

"standards such as Mendelssohn's Hear My Prayer set alongside Poulenc's acrobatically difficult Quatre motets pour le temps de Noël and works by Tallis, Parsons, Parry and others, all sung with the precision and grace that make this choir world famous." (Guardian)