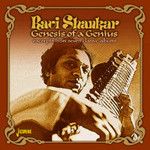 RAVI SHANKAR was perhaps the most well-known, influential, important Indian composer and musician of all time, having effectively introduced Indian music to the Western World and established the sitar as a serious musical instrument on the world stage.

By the time he commenced his recording career in the mid-50s he was already highly-experienced, being in his mid-30s and having been broadcasting regularly and composing both classical and film music since the late 40s.

Once his recording career was under way he became quite prolific, sometimes cutting a couple of LPs a year.

These recordings present the mercurial Shankar at the very peak of his career.