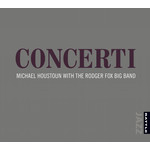 It may seem an incongruous pairing on the face of it, but Michael Houstoun and Rodger Fox have something vital in common - a passion for music, and it shows.

Their first recording together, Concerti is comprised of four substantial arrangements for jazz orchestra and concert piano, straddling two worlds in celebration of a common musical language. The music is dynamic, passionate, and extraordinarily rich in terms of its compositional and performance qualities. Simply put, this band kicks! And riding the wave like a seasoned jazz veteran is the fearless Michael Houstoun, matching the ensemble note for note. If Michael's contribution stopped at the remarkable arrangement of the first movement of Prokofiev's Piano Concerto No. 3, that would have been satisfying enough, but he goes head to head with Rodger and his full throttle ensemble for the full 12 rounds.

What happens when two maestros meet each other head on; two musical worlds collide, neither gives way but somehow each reveals something about the other that's new!

The combination of Michael Houstoun at the Steinway piano and Rodger Fox's suave trombone, with special guests and his Big Band in fine form, is a rare treat for listeners. Both musicians have a lifetime's experience and craftsmanship to bring to this project yet this is the first time they have been onstage and in the studio together.

A movement of Prokofiev's famous third Piano Concerto bristles in this arrangement by Grammy award-winning Bill Cunliffe (USA) for an 18-piece Big Band. Two other arrangements by Cunliffe, Fox's long-time friend and masterful collaborator, will be new to listeners but not for long. David Lisik, Rodger's colleague and a composer at Te Kōkī New Zealand School of Music, has arranged a Mike Nock work for this album. Mike and Michael, Nock plays Houstoun plays Nock, have already worked together at festivals around New Zealand and Houstoun recorded works by Nock on his award-winning album INLAND (RAT-D016).

The Rodger Fox Big Band needs little or no introduction. Under Rodger's leadership, they've been at the cutting edge of jazz in Aotearoa for decades and their most recent album The Capitol Sessions (IA-1005), recorded at the legendary Capitol Studios in Los Angeles, is testament to their place amongst the best big bands in this part of the world right now.

So the stage is set. Let these brilliant, multi award-winning musicians take you on a journey somewhere new. You may begin as a lover of jazz or a classical music buff; however, you will emerge as a music-lover.

Sit back and enjoy!

"After last year's magnificent recording of the complete Beethoven Sonatas, Michael Houstoun deserves to relax, and clearly the pianist is having a ball on Concerti with the Rodger Fox Big Band.

There's no Beethoven here, although the longest track has the first movement of Prokofiev's Third Piano Concerto, presented in a smooth big band arrangement by Bill Cunliffe.

The Russian original gets quite a work-over, with a chart that accommodates both a spruce solo on drums from Lauren Ellis and a pretty juicy trombone turn from Fox himself.

Some jaws may drop when Prokofiev's opening clarinets are usurped by saxophones, leading to the sort of lush blowsiness that one might associate with closing titles in the moviehouse.

Although the listener might feel like a delinquent teenager blowing bubblegum in a concert hall, Houstoun not only chisels away with his customary incisiveness, but also dishes out some pretty mean cocktail piano.

Cunliffe also provides an overture of sorts with a Jazz Rondo from his recent Piano Concerto. Mozartian echoes are deliberate, starting with a hint of Eine Kleine Nachtmusik, and this cute and witty musical entanglement bubbles away very agreeably for just over 11 minutes." (WilliamDart NZ Herald)