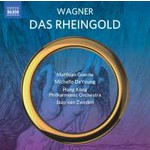 First performed as a cycle of four operas in 1876, Wagner's visionary Der Ring des Nibelungen (The Ring of the Nibelung) is one of the greatest works of art.

Centred around a ring which offers its bearer ultimate power and the attempts of various people to acquire it, the Ring cycle explores the relationship between love and earthly power and the themes of yearning and loss, all within a setting of medieval legend. The Prologue Das Rheingold depicts the theft and subsequent surrender of the ring forged from the Rhinemaidens' gold by the Nibelung dwarf Alberich.

"the Hong Kong Philharmonic sound fully up for the occasion and have the stamina for this demanding piece…Matthias Goerne sings Wotan beautifully with much baritonal sophistication, predictable care for words and able negotiation of trickier moments…Peter Sidhom enjoys himself greatly playing Alberich as an out-and-out 'baddie'…[the scene in Nibelheim] feels as if David Cangelosi's Mime, both funny and moving with any kind of braying excess, has acted as a catalyst to turn the occasion into a more full-on dramatic performance" (Gramophone Magazine, November 2015)

"The orchestral textures have a spaciousness and transparency, and an unforced sense of architectural shaping and dramatic flow...But the real surprise here is Matthias Goerne's performance as Wotan. His handling of the text is as exemplary as anyone would expect from such a seasoned lieder singer, but it's the power and gravitas that Goerne brings to the role that are so startling." (The Guardian, October 2015)

"Sidhom's dark-leather tone and malevolent characterisation make an impressive Alberich, fellow Briton Kim Begley is a smooth, sardonic Loge, ideally lyrical in his narration...Van Zweden conducts with an easy sweep that would carry one along in the opera house...This knocks spots off rival budget versions...and many more expensive." (BBC Music)