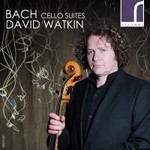 'It's very hard to put into words why this recording is so special. One of the finest Baroque cellists at last commits to disc great works he's lived with for many years, knowing as he does so that these are his last recordings (Watkin suffers from a chronic skin condition relating to his fingers, preventing him from playing). This is inspirational solo Bach of the highest order, intimate and exalted, and it's a profoundly moving achievement.' (BBC Music)

"Watkin's profound musicianship is more than enough to accelerate this recording of Bach's Cello Suites to the top of the tiny league of 'definitive' recordings...it's as if all the work that Watkin has ever done on these pieces has been absorbed absolutely and then reproduced in a performance that is able to be completely original in its voice at the same time as never producing a phrase that jars in its unsubtlety, or presents an ego that overarches the music." Gramophone Magazine Award WINNER 2015 - Baroque Instrumental

"Using two historic instruments and playing on gut strings, David Watkin gives a definitive period instrument account of Bach's six solo Cello Suites. It should be in any Bach lover's collection. One can only marvel at Watkin's range of colour, his elegance, his verve, variety and spontaneity - above all his understanding of line and pulse." The Observer, 19th July 2015 *****

Silk Road Journeys: Beyond the Horizon