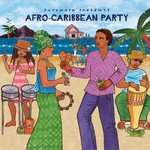 Afro-Caribbean Party is a collection that celebrates the incredible power of the African-influenced music of the Caribbean. The Caribbean has long been the source of some of the most impactful music in human history and its diverse styles are the result of 500 years of blending African, European and indigenous cultures in the Americas. The songs on Afro-Caribbean Party represent many different aspects of the irresistible dance music of Spanish, French and Anglo-Caribbean.