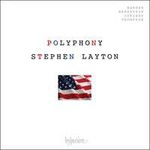 "This is the finest performance of Barber's Agnus Dei I've heard by any choir, live or on record…a wonderful recital, not to be missed." (BBC Music Disc of the month - August 2015)

"We have to be careful using the word "revelatory" in reviews, but that's exactly what Polyphony's performance is. It's as if Polyphony was coming to this work completely fresh, approaching it with no experience of its well-trod history nor any preconceived notion regarding its performing style or tradition, but rather as a new work, for that's how we experience it here. And for this alone (and perhaps for a couple of those Copland pieces) choral music fans can be grateful that this recording was made." (ClassicsToday April 2016)

Thompson, R:
Alleluia
Fare Well 'When I lie where shades of darkness'