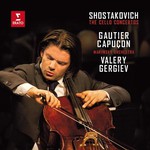 "Capuçon and Gergiev deliver some grand and glorious moments" wrote Gramophone when the French cellist Gautier Capuçon and the Russian conductor Valery Gergiev last collaborated on a disc of Russian music for Erato - works by Prokofiev and Tchaikovsky, released in 2010. The Daily Telegraph found that: "Capuçon [plays] with a blend of impeccable taste, Romantic ardour and technical aplomb ... Whether quizzical, rapturous, pensive or demonstrative, Capuçon has full measure of [the music] here in a performance of impressive stature."

Now, the two musicians -- whose collaboration, again in Gramophone's words, "was bound to strike sparks" - have come together for two live recordings, made in December 2013 at Paris's Salle Pleyel and June 2014 at St. Petersbourg's Mariinsky Thetre with the Mariinsky Orchestra. The works in question are Dmitri Shostakovich's cello concertos Nos 1 and 2, both of which were written for Mstislav Rostropovich. The first was composed in 1959 (a year after the Central Committee of the Communist Party admitted that in 1948 there had been unjust condemnation of Shostakovich and other composers as 'Formalist'), the second in 1966. The two concertos are different in spirit and shape: the first is often assertive and energetic, and features a huge cadenza for the cello that is almost a movement in its own right, while the second is introspective and enigmatic.

"Gautier Capucon is too consummate a musician to opt for pale imitations. Working hand in glove with Valery Gergiev and the Mariinsky Orchestra, he delivers passionate and rhythmically incisive accounts…[there is] much to admire here, particularly in the way both soloist and orchestra ratchet up the emotional temperature throughout the course of the second movement [of the Second Concerto]" BBC Music Magazine, December 2015

"Gautier Capucon immediately shows that his are interpretations to be reckoned with. His account of the first movement of the First Concerto brings to bear an exceptional variety of articulation where lesser players storm through regardless." Gramophone

Bruckner: Symphony No. 9 in D Minor