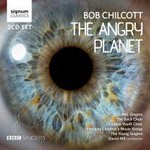 The three works on this 2CD set further confirm Chilcott's status as one of the world's most popular active choral composers. The BBC recently gave Chilcott a [sell-out] concert from BBC Maida Vale, on 5th June, to celebrate BBC Music Day 2015.

'The Angry Planet' was a commission inspired by conductor David Hill for the BBC Proms in 2012, and combines the precision and skill of the BBC Singers and The Bach Choir with the exuberance of a host of young people and children's choirs including The Young Singers, London Youth Choir and Finchley Children's Music Group.

"This recording...is directed by David Hill and expertly weaves the professionalism of the BBC Singers and Bach Choir with the touching innocence of a mix of young choirs...this two-CD set makes a compelling case for Chilcott as today's pre-eminent composer for all voices, whatever their ability." The Observer, 12th July 2015 ****

Five Days that Changed the World
The Miracle of Spring
The Angry Planet, (An Environmental Cantata)