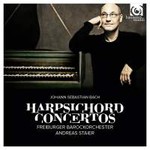 The seven fabulously inventive concertos for solo harpsichord and orchestra mark a key stage in the history of the concertante form. The set was compiled during Bach's Leipzig years, when he directed the city's Collegium Musicum, and requires unfailing virtuosity and imagination of its performers. The contagious, invigorating pleasure one feels in the interpretations of Andreas Staier and the Freiburger Barockorchester restores the full range of meanings to the word 'play'!

"Andreas Staier's grit, flair and expressive freedom, plus Freiburger Barockorchester's athletic ensemble playing, makes these performances bounce and swing. Staier embraces the chunky chordal textures gained over the single-line originals and gives them a thick, meaty attack that is great fun." (The Guardian)

"They've recorded all seven of Bach's concertos from his Liepzig years with a sense of playfulness and dynamic interplay … outstanding communication between them all in the seven Bach concertos here." CD Review, 29th August 2015

"The playing bristles with energy, and both the harpsichord and the period instruments of the Freiburgers are presented in larger-than-life, hyperreal close focus rather than the balances of the concert hall." The Irish Times, 28th August 2015

"If you're looking for fun, abandon…and luminosity, then maybe this is not for you. However, it's still probably the most brilliant executed of any version in the catalogue, one whose tough, intellectual, aesthetic and geometric logic celebrates Bach with sustained and impressive consideration." Gramophone Magazine, September 2015

Bruce Mason's 'The End of the Golden Weather'
more suggestions…