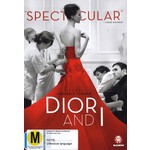 DIOR AND I is a tantalising 'behind-the-seams' glimpse at the making of Raf Simons' first haute couture collection for Christian Dior in 2012.

Established in the fashion world as a minimalist designer, Simons has both his reputation and the legacy of Dior on the line when appointed Creative Director of the iconic Parisian brand. With only eight weeks to complete the collection, Simons and his dedicated group of collaborators work against time to make his vision a sublime reality. Melding the everyday, pressure-filled world of fashion with mysterious echoes from Dior's past, the film is also a colourful homage to the long-serving seamstresses at the couturier, as history is once again created at Dior.

Language: French and English (English subtitles for the French-language sections)

"Terrific...intense and entertaining...a fabulous "behind the seams" peek at an exclusive world"
INDIEWIRE

"A tribute to the unsung heroes of fashion"
INDIEWIRE

"A fashion doc with both a sense of history and a feel for the energy of a work in progress"
John DeFore, THE HOLLYWOOD REPORTER

"The most ethereal and cinematic fashion documentary"
FILM SCHOOL REJECTS

B+ " Succeeds in bringing this exclusive world down to earth, knitting the viewer with its needles and threads and making a highly relatable story, no matter where you come from or how you feel about fashion"
Nikola Grozdanovic, INDIEWIRE, PLAYLIST

"This behind-the-runway look at one of fashion's legendary brands has a sleek, efficient stylishness"
Nick Schager, SLANT