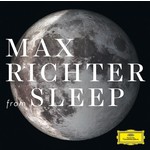 Acclaimed British composer Max Richter has written a new landmark recording: From SLEEP is actually and genuinely intended to send the listener to sleep.

The ground-breaking new work is scored for piano, strings, electronics and vocals - but no words. "It's my personal lullaby for a frenetic world," he says. "A manifesto for a slower pace of existence."

Richter came up with the idea as he has always been fascinated by the process of sleep. "As a child, it was my absolute favourite activity. I often think of composing as a daydreaming activity and, if I could, I would sleep for 23 hours a day! It's one of the most important things we all do and for me it's almost like a religion."

During his preparations, Richter consulted the eminent American neuroscientist David Eagleman, in order to understand the mechanisms of the sleeping mind, and the ways in which music can interact with them, which has directly influenced the composer's writing.

Richter describes it as an "investigation" into the process of sleep. "It's really an experiment to try and understand how we experience music in different states of consciousness - awake and asleep - and ask whether different people hear it in different ways. For me, this piece of music is an attempt to see how that space where your conscious mind is on holiday can be a place for music to live."

"The dream state is like you have switched the whole factory over, but there is still this window to the senses, so that the things you are hearing can get incorporated into your dream, and we have all had this experience when, for example your alarm clock goes off and it becomes part of your dream narrative." - David Eagleman in conversation with Max Richter

Coinciding with the renewed interest in durational works within the fine art community, Richter says: "this isn't something new in music, it goes back to Cage, Terry Riley, and LaMonte Young, and it's coming around again partly as a reaction to our speeded up lives - we are all in need of a pause button."

"Sleep is functional music, furniture music, a soundtrack for relaxing and sleeping, and as such it's successful. It's not "classical" music, and shouldn't be judged as such. It does what it claims, and it's enjoyable, and that's a good enough recommendation to anyone who wants some light music to listen to when taking a break." (Musicweb Sept 2015)

"The full version, Sleep, is intended to actually send us to sleep, but From Sleep is a one-hour offshoot during which we're supposed to stay awake...It's a warm, slow-moving daydream with no sharp edges and a self-consciously hazy sound, as if recorded next door or underwater" The Guardian