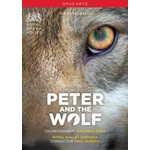 Peter and the Wolf, Prokofiev's musical fairy tale, has been delighting children since 1936. Nearly 60 years later, in 1995, the young choreographer Matthew Hart created a witty choreographed version for the Royal Ballet School with designs by Ian Spurling. Described as 'an utterly delightful ballet and a perfect showcase for the younger students,' by the Royal Ballet's Director, Monica Mason, it was staged again - and recorded for this DVD - in 2010.

"...Matthew Hart's Peter and the Wolf is one of the most beguiling children's ballets around." The Telegraph

Documentary feature on rehearsing Peter and the Wolf