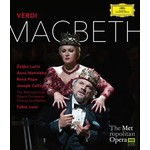 An unforgettable performance of Anna Netrebko at the MET now on DVD/BR!

Outstanding press acclaim for her performance:

New York Observer stated: ".. a superstar cast ... the most potent: Anna Netrebko's ferociously exciting star turn as Lady Macbeth ... a "demented" performance, one so exciting it propels both artist and audience figuratively to the brink of madness."

While the New York Times writes: "Lady Macbeth is causing a sensation at the Metropolitan Opera ... This was Ms. Netrebko's night"

This MET performance featured not only an astonishing Anna Netrebko, but also a superstar-cast with artists like Željko Luèiæ, René Pape, Joseph Calleja and a brilliantly performing MET Orchestra and Chorus conducted by Fabio Luisi.