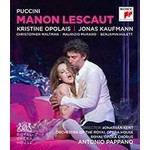 'From the moment Kaufmann and Opolais embark - with infinite delicacy - on their emotional journey, it becomes clear that this is a vocal marriage made in heaven. His warmly burnished sound is balanced by the exquisitely-nuanced purity of hers, and they are supported by a performance in the pit, under Antonio Pappano, of rare refinement.' THE INDEPENDENT

'Exhibiting qualities from each of the Three Tenors - Pavarotti's gleaming tone, Carreras's good looks, Domingo's dramatic presence - Jonas Kaufmann is justifiably lauded as the outstanding tenor of our day. In Jonathan Kent's new production of Puccini's Manon Lescaut he delivers a thrilling performance that satisfies both musically and theatrically.' LONDON EVENING STANDARD

'Antonio Pappano has few peers today as a Puccini conductor, and gives the score a tremendous sense of vivid theatricality' THE GUARDIAN

"Kaufmann is a gloriously ardent Des Grieux, recklessly embarking upon an emotional journey almost as distressing as that of the heroine herself. Kristine Opolais matches him in a performance that combines tenderness with wilfulness and a kind of doomed personal integrity exemplified in her vocal line. And Pappano brings his customary sense of style to the music" BBC Music

"do not pass up the chance to see the power and achievement of Jonas Kaufmann and Kristine Opolais in the lead roles. Even in this day and age, to see (and hear) such uninhibited physical master of stage parts in opera is not so common - and everyone from the artists themselves to the director, designers and video director should be prasied…around them the support is terrifically sharp, the well-placed chorus included" Gramophone

The Tales of Beatrix Potter (choreographer by Frederick Ashton)