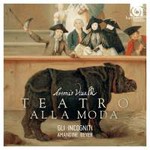 1720: in his famous pamphlet 'Il teatro alla moda', the composer Marcello satirised the excesses of new-fangled Venetian opera. Cadenzas, variations, 'divismo', virtuosity, popular dances, assorted sound effects: nearly three centuries later, each of the 'qualities' he mocked has provided the inspiration for this new release from Gli Incogniti to the glory of Vivaldi. The Red Priest who aroused Marcello's patrician indignation could not have cared less about such formal taboos! His experiments, his spontaneity, his juxtapositions and contrasts served only one rhetorical cause: the theatrical dimension of his instrumental music. Take your seats!

"While on paper there's obvious common ground - Vivaldian sequences, dazzling arpeggios across the strings, languid aria-like slow movements - when imbued with the intensity and imagination of Beyer and Gli Incogniti these emerge as a constant stream of new colours, emotions and effects…forget the cheap jibes; Vivaldi was a supreme master of musical invention, as this recording triumphantly demonstrates" (BBC Music Five Stars Concerto Choice Feb 2016)

"Beyer's exciting young group have gleefully thrown Marcello's criticisms back in his face by showing not just how vivid Vivaldi's theatricality can be, but that it shows itself in its greatest depth in his concertos rather than his stage works ...flow, colour, lyricism and poise combine, and Vivaldi's spirit lives to command the stage." (Gramophone)

"a parade of exhausting virtuosity applied to grace and beauty, played with dazzling vivacity by Amandine Beyer" (The Independent)