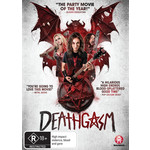 Brodie is the new kid in town. With a crack-addicted mum and an obsession with all things metal, he doesn't fit in to his white-bread neighbourhood or with his religious relatives. Even sightings of the gorgeous Medina aren't enough to shake Brodie from his belief that he has landed in small-town hell.

But when he meets fellow metalhead Zakk while picking through vinyls at the local record store he knows he's found a mate for life. Together with their equally socially-outcast friends Dion and Giles they form a band, Deathgasm, and when they find a mysterious piece of sheet music at the house of their metal hero Rikki Daggers they dedicate themselves to learning to play it...Little did they know, the mystical music is actually a spell to summon malevolent forces, and very soon everyone in the town has been infected by the demon curse. Now, our thrashing losers must man up to save the day.

With shades of early Peter Jackson and schlock-horror classics EVIL DEAD and SHAUN OF THE DEAD, DEATHGASM is a blood-soaked, hilarious trip set to killer guitar riffs. Get ready to rock.