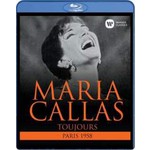 This Blu-ray disc is part of a collection of three that gather together concert and stage performances from the latter phase of Callas's career, 1958-1964. These are the only professional video recordings of Callas in performance on stage. All three blu-rays contain footage of Callas performing arias in concert. Even without staging and costumes, she demonstrates her mesmerising stage presence and her ability to bring the music and the character to life - through the music and text, through facial expression, and through subtle use of gesture.

Originally recorded in 4:3 standard definition and mono sound, and remastered to 1080i and stereo / 5.1 surround sound for Blu-Ray release.