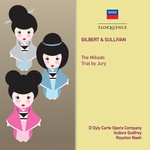 Performed 300 times in its first two years, Trial by Jury was an acclaimed success that cemented the symbiotic relationship between composer and librettist. This 1974 recording, part of the D'Oyly Carte's last cycle of Savoy Operas for Decca, was released the following year in a busy season celebrating the centenary of the work's first performance and the foundation of the company. As with its 1963 predecessor, most of the principal roles in this Trial recording are taken by the company's leading lights - notably star patter-man John Reed, on sparkling form as the Judge - rather than the artists who routinely played them on stage.

" In 1957, D'Oyly Carte began a new series of recordings to take advantage of the stereo technology, even though the recordings they were replacing were but eight years old. Pirates came first, followed by this Mikado the same year. For the first time in history, a D'Oyly Carte recording had outside competition, as Sir Malcom Sargent launched his own series with a Mikado that appeared the same year. This set was originally issued simultaneously in mono and in stereo. It had a long life in the catalog, as D'Oyly Carte would not record The Mikado again until 1973." (Chris Webster)

"By far the best recording of the work ever made. Thomas Round is the greatest Nanki-Poo on record, likewise Donald Adams's Mikado and Kenneth Sandford's Pooh-Bah - the latter in far better voice than the 1973 version." (Mel@Marbecks)

"I am pretty safe in saying that this recording is probably one of the best G & S recordings...ever! A cast to die for! Listen to Thomas Round's most beautiful rendering of "Wand'ring minstrel" and the horrific crazy laugh of Donald Adams in "Humane Mikado". A must for everyone's collection." Mel@Marbecks

"The new Decca set will hold its own for its authenticity among real lovers of Gilbert and Sullivan" Gramophone Magazine, August 1958 (The Mikado)