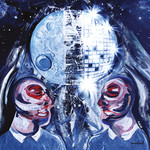 A decade after they delivered Okie Dokie It's the Orb on Kompakt on...Kompakt, Alex Paterson and Thomas Fehlmann return to the stalwart Cologne label with an album bearing a less sportive title and it sounds like serious sci-fi business. The standard edition consists of four tracks, each one between nine and 15 minutes in length.

Unlike Okie Dokie, this is all new, not an amalgamation of tweaked, previously released tracks and new material. Lest this be seen as the Orb's "most mature work to date," within seconds of the opener, a mild-mannered voice from a colorful documentary about Sumerian gods intones, "If you believe in evil, then you probably need a whack on the back of the neck with a big fucking stick." After four-and-a-half minutes of ambiance that intensifies in gradual fashion, a fluid, sturdy beat and light chime-like accents enter to set the tone for the remainder of the 50-minute program.

Both "God's Mirrorball" and "Moon Scapes" contain several sections that tug and drift with a calm but steady flow (one of Fehlmann's favorite terms). The latter is heavier and more propulsive than the former, trucking dub techno filled with thrumming and thwacking drums and sections highlighted by electric keyboard fillips and string-sample flickers. The relatively brief "Lunar Caves" would be ideally suited for one of Kompakt's restful Pop Ambient compilations if it weren't for some radio interference and a couple intensely rhythmic components. -AllMusic