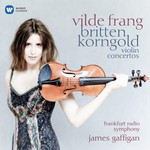 Vilde Frang has long dreamed of recording the violin concertos of Erich Korngold and Benjamin Britten - two highly contrasted pieces, both written in the USA around the time of World War II, and a unique pairing. As The Strad magazine has said: "Vilde Frang … weaves an emotional narrative that is utterly spellbinding … it feels as though the music's inner soul is being revealed for the very first time."

"Frang has the knack of breathing life into every note, whether by variations in phrasing, attack, tone or dynamic - just a few of the weapons in her impressive musical armoury" BBC MUSIC MAGAZINE

"Her expressive ace is to make everything sound as natural and coherent as speech; it's a rare talent to be so vocal without actually opening one's mouth" INTERNATIONAL RECORD REVIEW

"These are urgently communicative, potentially transformative accounts of scores which, if no longer confined to the fringes of the repertoire, have yet to command universal admiration…playing with almost intimidating dexterity and polish, not to mention impeccable intonation [Frang's] music-making still manages to project an impression of honesty and naturalness" Gramophone Magazine Award WINNER 2016 - Concerto

"Frang is unfazed by the difficulties of both works (Britten had to simplify the solo part for its dedicatee, but later restored its technical pyrotechnics), and her keen, penetrating tone never wallows in Korngold's Rachmaninovian melodies. Indeed, she brings an astringency to the music that one associates with the Stravinskyan piquancy of Britten's writing. A bold coupling, superbly executed." Sunday Times, 31st January 2016

"[Frang's] sound is superb - icy, fiery, whispered, ultra-rich - and her phrases pour out fearlessly, urgently. It's a fresh and convincing performance. She couples the Britten with the 1945 wartime concerto by Erich Korngold and doesn't apologise for its syrupy contours, but also brings out interesting nuances of doubt and fragility. James Gaffigan and the Frankfurt Radio Symphony are robust backers" The Guardian, January 2016 ****

Manchester By The Sea