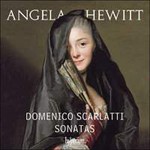 Baroque pianist par excellence Angela Hewitt turns to the rich seam of Domenico Scarlatti keyboard sonatas. There are 555 in total-here Angela performs sixteen of the finest.

"With so much experience playing music of the Baroque, you'd expect something highly personal from Hewitt. Even in a sonata as well known as the lilting Kk9, we hear it afresh, with no turn of phrase going unconsidered. In the bustling Kk159, replete with horn calls, she reveals as much interest in the inner parts as in the outer ones" (Gramophone)

"[Hewitt's] dancing sense of rhythm and playfulness in the bravura Kk29 in D, or the "As fast as possible" G major, Kk427, is irresistible, as is her cantabile emulation of the greatest 18th-century singers in the aria-like slow sonatas…as in her admired Bach recordings, Hewitt's crisp articulation conveys an impression of Scarlatti's original harpsichord" (Sunday Times)

"By assembling Sonatas into groups of three or four at a time Hewitt effects variety and contrast, but ensures through the constancy of her poised playing generally that such diversity does not become enervating or bewildering. The dignified restraint exercised in the courtly gestures and fanfares of the well-known E major Sonata KK380 as a coda to this disc whets the appetite for more." (MusicWeb Feb 2016)

"This is a release all Hewitt fans will welcome and is good introduction to those few who have not yet discovered this versatile pianist" Pianist Magazine, June 2016 ****

"She's attentive to the music's other facets, from the ancient sorrow of K8 and the elegiac grandeur of K308 to the humour implicit in K427's unexpected fortissimo chords - 'like somebody jumping out at you from behind a door'" Early Music Today, September 2016