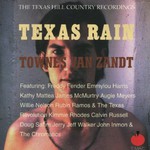 At the turn of the '90s, Townes Van Zandt began recording a series of duets in Texas with a bunch of longtime admirers that included Willie Nelson, Emmylou Harris, Jerry Jeff Walker, Freddy Fender and Doug Sahm. The full-band sessions sought to breathe fresh air into the lungs of some of his best-known songs. Initially given a limited release in 2001, 'Texas Rain' has now been newly remastered and repackaged with a full-colour 20-page booklet, indepth sleeve notes and revealing interview with original producer Kevin Eggers.

It serves as one of Van Zandt's defining works."This was the cream of the cream. Texas Rain is a timeless record. We really felt that we'd made a huge breakthrough in terms of our creative collaboration, the level of musicianship, the quality of the tracks and the energy we had. It was a golden time in our lives." Kevin Eggers - Producer & Arranger

Queen At the Table

Out Of The Blues
more suggestions…