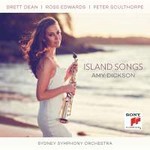 Twice Grammy-nominated AMY DICKSON made history by becoming the first saxophonist and the first Australian to win the 2013 MasterCard Breakthrough Artist of the Year Classic Brit Award. Recognised widely for her remarkable and distinctive tone and exceptional musicality, she has performed throughout the world in prestigious venues such as the Wigmore Hall, the Royal Albert Hall and the Sydney Opera House, and as a soloist with orchestras including the Philharmonia Orchestra, Royal Philharmonic Orchestra, London Philharmonic Orchestra, Ulster Orchestra, Sydney Symphony Orchestra, Melbourne Symphony Orchestra and the Vienna Chamber Orchestra. Peter Sculthorpe's "Island Songs" contains some of the most beguilingly lyrical music written by the foremost Australian composer of his generation, whose death in August 2014 was lamented throughout the world. Ross Edwards' "Full Moon Dances" is made up of five seamless movements, creating a kaleidoscope of sound featuring fragments of birdsong, plainsong, drones and Indigenous chants from around the world. These sounds are brought together around the central figure of the solo saxophonist. "The Siduri Dances", by composer, conductor and violist Brett Dean, celebrates another female figure: 'a wise female divinity from the Epic of Gilgamesh'. 'Island Songs and The Siduri Dances were recorded in the Eugene Goossens Hall, ABC Ultimo, with conductor Benjamin Northey and ARIA-Award-winning producer-engineer Virginia Read; Full Moon Dances was recorded live in the Concert Hall of the Sydney Opera House with Miguel Harth-Bedoya on the podium.

"Dickson's new release is an intriguing and entirely serious collection of recent works by Australian composers, works she did much to create...it is Brett Dean's 2007 flute concerto The Siduri Dances, here arranged for saxophone, which offers the most wide-ranging demonstration of Dickson's mastery with its note-bending, buzzing effects and hectic rhythms." (Guardian)

"Amy Dickson is the star of this disc…thrilling performance and vivid recording." (Five Stars BBC Music)

Dean, B:
The Siduri Dances for flute and string orchestra
for saxophone