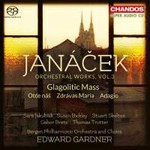 Not only does this collection of orchestral works by Janáček follow two highly praised volumes with such great soloists as Jean-Efflam Bavouzet and James Ehnes, but it also features one of the composer's most monumental works - with the vividly admired organist Thomas Trotter - along with three contrasting shorter pieces.

The Glagolitic Mass is considered his finest non-operatic work. It was premiered a year after the Sinfonietta - recorded in Volume 1 [CHSA5142] - to critical acclaim. This impressive piece makes full use of the orchestra and chorus, with virtuosic solo parts for tenor and soprano, as well as organ. It is set within a frame of purely orchestral movements in which the Bergen Orchestra and its new Chief Conductor, Edward Gardner, demonstrate with authority their deep empathy with the repertoire.

The album is completed by three highly diverse characteristic works: the mournful Adagio, the Slavonic Otče náš and the deeply personal Zdrávas Maria.

"I'm hard put to it to think of a choral work that is as physically exciting as this one. In its way it's as elemental as Le Sacre du Printemps. Can Gardner and his predominantly Norwegian forces do justice to it? The orchestra Introduction promises much: the sound of the brass is vivid while the strings and woodwind are agile and eager; the orchestral playing as a whole is very incisive, which is a key attribute needed in such music as this. When the choir enter in the Kyrie - for ease of reference I will use Latin and English in this review - they make a fine initial impression. I was also pleased to find that they're well positioned in the aural image: too often one hears choral/orchestral recordings or broadcasts where the choir is balanced unfavourably vis-à-vis the orchestra but that's not usually a feature of Chandos recordings and it's not the case here either. The American soprano, Sara Jakubiak is very communicative in her singing and there's no trace of Slavic wobble. It's a very fine, exciting performance and Chandos have captured it in thrilling sound." (MusicWeb March 2016)

"Gardner steers the clash of brass, strings, chorus and soloists with confidence, the instrumental outer movements ablaze with excitement, the whole well balanced but still dangerous and invigorating." (The Guardian)