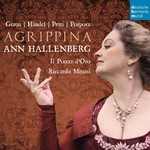 The programme presented by Ann Hallenberg for DHM is a homage to the historical roman figure of Agrippina, one of the earliest historical women to inspire the fantasy of librettists and composers. Ann Hallenberg and a team of musicologists researched the musical archives to unearth all surviving operatic manuscripts containing the figure of Agrippina.

Twelve the arias are WORLD PREMIERE RECORDINGS. Apart from Handel's famous opera 'Agrippina' and Telemann's 'Germanicus', all music on this album has been recorded for the first time. This album is also a fascinating journey through the history of baroque opera. The earliest piece, Legrenzi's 'Germanico sul Reno' dates from 1676 and is a typical example of early baroque style. The latest work, Graun's 'Britannico' from 1752, was written only four years before the birth of Mozart, at the very end of the musical baroque period.

It's commonplace to observe that Baroque audiences knew the history of ancient Rome in a way that's hard to imagine today, but it has not been so common to translate this wisdom into an album programming concept, and that's just what mezzo-soprano Ann Hallenberg and her husband, musicologist Holger Schmitt-Hallenberg, accomplish here, with the latter unearthing a host of virtually unknown Agrippina arias. The most famous "Agrippina" is Handel's, composed in 1709 and the highlight of his sojourn in Italy. It is well represented here, and its representation of its scheming heroine would have been known to many Baroque audiences. But compare Handel's treatment of Julia Agrippina with that of Giuseppe Orlandini in his forgotten "Nerone": her over the top rage is treated differently by each composer here, and comparing them is just what an audience of the 18th century would have done. Hallenberg has the dramatic chops to take on these temperamentally extreme figures, and she receives punchy support from the historical-instrument ensemble Il Pomo d'Oro and director Riccardo Minasi. Her voice is remarkably consistent in tone across its registers. The sound is too close up, but in general this is a good choice for lovers of Baroque opera who want to explore how audiences of the period would have experienced it.

"We already know Agrippina, the anti-heroine of Handel's opera of the same name - Nero's mother and the target of about as many assassination plots as Fidel Castro before she was eventually murdered, on the orders of her son. But there are two other Agrippinas, her mother and her aunt, with stories only slightly less salacious. All three featured in 17th- and 18th-century operas, most of them forgotten; but mezzo-soprano Ann Hallenberg has made it her task to unearth them. The 12 arias recorded here for the first time, include several showstoppers: singers will be queueing up to include Mi Paventi from Graun's Britannico in their recitals, and there's an equally dazzling vengeance aria by Orlandini, in which Riccardo Minasi's orchestra, Il Pomo d'Oro, really lets fly. Hallenberg is as convincing in these as she is in the more reflective numbers, and her three arias from Handel's opera are very classily done, too." (The Guardian)