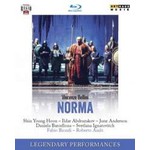 This production of Vincenzo Bellini's masterpiece Norma is extraordinary in many aspects. Staged by Italian director and filmmaker Roberto Andó at the Teatro Regio in Parma, it gathered international stars like American soprano June Anderson as Norma, whose lyric voice shines particularly brightly against the softer sound-texture of historic instruments, and rising star Daniela Barcellona as well as Russian bass lldar Abdrazakov. The ensemble's velvety tone and transparent playing enabled a constant musical exchange between orchestra and singers, which complemented the exquisite voices perfectly. Fabio Biondi's transparent conducting and the authentic performance practice of Europa Galante illuminated the musical structure of Bellini's opera and provided a new perspective on early 19th-century opera.

"Biondi leads his forces in a production that has plenty of attack and momentum with stirring set pieces for the big scenes where the people of Gaul are athirst for battle to throw of the yolk of Rome. A very satisfying production of one of Bellini's best-loved operas with Anderson a most persuasive Norma. Her emotionally-laden duets with Barcellona as Adalgisa impress." MusicWeb