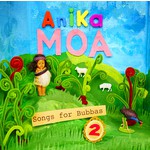 These reviews just in:

"Mama, you can't run from a Meerkat, you're waaay too slow!"

Hot on the scuffed up heels of Anika's first children's album,themulti-award winning Songs for Bubbas, comes it's younger, naughtier twin. Full of delight and mystery, Songs for Bubbas 2 promises to cast a spell of wonderment on your preschoolers. Anika's muses/focus group are her own children and with a new arrival between albums, the songbird and crazy storyteller has three mischievous tamariki for inspiration.

Songs for Bubbas 2 is joyfully jammed with 12 songs that go will have children dancing with delight yet also keep them quiet in the car. It takes the listener's imagination on a journey, from escaping wild animals to being popped in a witches' stew - ewww! Along the way they will meet a naughty martial arts obsessed rat who likes to Chop! Chop! And a Taniwha who is one loveable rogue.The album helps teach Te Reo too. There's a cover of classic Maori song, 'A Haka Ma' while the beautiful old hymn, 'E TeAriki' will send them off to sleep (with all these dreams in their heads).

Such was the demand for a sequel to Songs for Bubbas that Anika was able to raise all the funds needed on PledgeMe thanksto her adoring public. The album was then written in cottages all over Aotearoa and recorded/co-produced by her musical soul mate, Andre Upston. Yes, Anika is as magical a force as ever as she glides with ease between her writing roles, parenting and touring. She's pretty cool if you ask me.

"My kids have given these 12 songs their personal stamp of approval. They are my inspiration and continue to help me deliver my upmost bestest me. I'm so happy that I can take them on my journey as I write about my life from all angles. A huge thank you to everyone who put their money into this album. I know you've been waiting to hear what happens next…"

My Nanas Farm
Taniwha, Taniwha
If I Had A Little Girl
The Witch Of Maketu
A Haka Ma
Chop ChopHiyaaa!
KoWaiTouIngoa
The Adventures of Barry and Taane 2
Little Bird 2
Soren
Our Dream (For The Parents)
E TeAriki