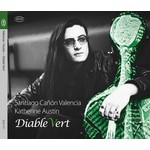 Born in Bogotá in 1995, Santiago Cañón Valencia has been praised as one of the most promising young cellists of his generation. His major musical mentors have been Henrik Zarzycki in Colombia and James Tennant in New Zealand. He began winning major prizes in International competitions from the age of 11 including the Carlos Prieto (2006), Adams (2009), Beijing (2010) Gisborne and Johansen (2012), and the Lynn Harrell and Pablo Casals (2014). He has performed as soloist and in recital throughout Australasia, the USA, South America, South Africa, Europe and Russia and has previously recorded a highly praised debut CD of solo 20th century works in 2012.

Currently Head of Piano at the Conservatorium of Music, University of Waikato, in Hamilton, Katherine Austin was the winner of the inaugural New Zealand Young Musician of the Year competition and the New Zealand National Piano Award, both in 1982. Her principal mentors included Janetta McStay, Bryan Sayer and Irina Zaritskaya. She has performed as soloist in New Zealand with all the major orchestras including the NZSO and Auckland Philharmonia, and performs regularly in Europe, Australasia, China and the Americas as the pianist of the New Zealand Chamber Soloists and the Tennant-Austin Duo. Between 2008 and 2016 Katherine and Santiago have performed in over 100 concerts together.

Argentinian composer Alberto Ginastera (1916- 1983) is considered one of the most important composers of Latin America. In his Pampeana series of compositions he was inspired by the Pampas, lowlands located near the bottom of South America. Pampeana No.2 for Cello & Piano Op. 21 has status in the cello repertoire because of its musical and technical difficulties.

During the time between World Wars I and II cellist/composer Gaspar Cassadó (1897-1966) was the blinding virtuoso who astounded audiences all over the globe with his electrifying playing and charisma. Among the many concert pieces that he composed Dance of the Green Devil is perhaps the piece that best described his personal character.

Claude Debussy's Beau Soir (Beautiful Evening), a work composed while he was still a teenager, represents a stage of traditional romanticism. With poetic texts taken from a collection called Les Aveux (Confessions) by Paul Bourget, a personal friend of the composer, Debussy (1862-1918) depicts the poet's wish to be happy and enjoy life on a beautiful evening, even though death is inevitable.

Around 1849 Robert Schumann (1810-1856) stopped writing mostly for piano and turned to a new genre: works for piano and accompanying instrument. He provided various wind instruments systematically with Romances, Fantasies, etc. and always provided an alternate part for strings, as in Adagio and Allegro Op. 70 for Horn and Piano. After playing the newly written work with the horn player Julius Schlitterlau, Clara Schumann wrote in her dairy: "The piece is splendid, fresh and passionate, just as I like it!"

Nikolai Rimsky-Korsakov's (1844-1908) Flight of the Bumblebee (from the opera The Tale of Tsar Saltan) has challenged the dexterity of many instrumentalists. The bee in question, a young prince in disguise, is set on revenge against his wicked aunts.

Mexican composer Arturo Márquez (1950-)
is recognized worldwide as one of the leading composers of this generation. Composed in 2006, Lejanía Interior for Cello & Piano was commissioned for the 5th Carlos Prieto Cello Competition held in Morelia. This piece is a very clear example of Marquez's trademark nationalistic style.

Ernest Bloch's Prayer is dedicated to American cellist Hans Kindler, who also premiered his Schelomo. Completed in 1924 this piece is typical of the emotional Jewish style Bloch (1880-1959) perfected, and is the first of three sketches for cello and piano From Jewish Life.

David Popper (1843-1913) Spinnlied
David Popper was an exceptional teacher and concert cellist who wrote many short showpieces to perform on his own concert tours in Europe. He sought to extend the technical and expressive abilities of the cello, and he could perform a work such as his Spinnlied, which travels at speed to the highest reaches of the instrument, without an endpin! Popper was born in Prague and died in Baden outside Vienna.

The Caprice XXIV is the final work in the set of Niccolò Paganini's (1782-1840) caprices and is one of the most famous pieces of music. In the key of A minor it consists of a theme, 11 variations, and a finale. His 24 Caprices were composed in the period between 1805 to 1809, while he was in the service of the Baciocchi court.

Marlos Nobre (1939-) Poema III, written by contemporary Brazilian composer Marlos Nobre, takes a simple melody from an inner space all the way to a full-blown expression of the most passionate kind, and back.

Most works with 'capriccioso' in the title would signify a light-hearted, flighty work, but in Pezzo Capriccioso Pyotr Ilyich Tchaikovsky (1840-1893) was writing under the influence of a close friend's battle with terminal syphilis. The B minor tonality allows for rich and dark expressions of grief. The first performance occurred in Paris on the 28th of February 1888 with the dedicatee, the cellist Brandukov, and the composer at the piano.

Mstislav Rostropovich (1923-2007) is remembered as one of the greatest cellists and musical figures of the last century. Though not a prolific composer, he did write for his own instrument, and his best-known work is this brief Humoresque Op. 5.

Sergei Rachmaninoff (1873-1943) composed his set of 13 songs Opus 34 in 1912, but it was only after three years that he added a small wordless closing piece, the Vocalise Op. 34 no. 14 which soon stood out from all the other songs in terms of popularity. This expressive, melancholic piece has circulated in countless arrangements by others since its first performance in 1916.

Camille Saint-Saëns (1835-1921) The Swan. Carnival of the Animals was written in 1886 purely for fun. Saint-Saëns instructed that the work was not to be published until after his death. The very popular Swan movement was so well received that he allowed just this movement to be published in 1887. It has remained the cello's calling card ever since, and a great way to finish a concert or CD.

"The 14 tracks on Diable Vert offer lighter fare: 70 minutes of potential encores, from Saint-Saens' graceful swan to Rimsky-Korsakov's busy bumblebee, particularly agile here, taking just longer than a minute to accomplish its flying mission. Valencia's unforced and sweetly lyrical tone serves him well in a moving Prayer by Bloch…An energetic account of a Schumann Adagio and Allegro are among the more serious delights. English cellist Steven Isserlis described this as being "as romantic as romantic can be", a judgement totally vindicated by the incandescent performance in this recording." - William Dart, NZ Herald, April 2016