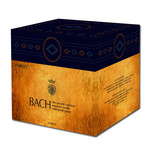 This boxed set includes 55 Hybrid SACDs in individual slip cases. The recordings on discs 1-27, originally released on CDs, have been upsampled and surround sound has been added, making this the only available complete set of the cantatas in SACD format.

Throughout most of his professional life, Johann Sebastian Bach composed cantatas for use at church services: it is thought that he probably wrote at least 300 such works. Some 200 of these are still extant, of which the earliest hail from Bach's time as organist in Arnstadt (1703-07) and the last were composed only a year or two before his death in 1750. In 1995, when Masaaki Suzuki and his Bach Collegium Japan began the monumental journey of recording the cantatas, they decided to follow in Bach's footsteps. Consequently the first volume of their series - Disc 1 in the present boxed set - featured three of Bach's very first cantatas (BWV 4, 150 and 196) while the series (and the set) ends with the last one: Lobe den Herrn, meine Seele BWV 69. Recorded and released over a period of 19 years, the BCJ cantata cycle has met with international acclaim, Masaaki Suzuki and his team earning the respect of reviewers and experts through the excellence of their performances, but also through their approach to the music, described by one reviewer as 'seeking devotional depth rather than brilliance for its own sake.'

The remarkable consistency displayed throughout this long-term project is largely due to Masaaki Suzuki, who, when he introduced the series in 1995, expressed his conviction that Bach's music contains 'a message which can touch the human heart, regardless of natio¬nality or cultural tradition'. Many of his musicians - soloists, choristers and instrumentalists - have remained remarkably loyal to the undertaking from the very beginning, as has the Shoin Women's University in Kobe, by providing its chapel as the recording venue throughout the entire series.

"Suzuki balances detail sensitively, helped by the SACD sound...Hana Blažíková duets exuberantly with trumpet in her aria...this is a superb disc, Suzuki at one with Bach - and both at their best." BBC Music Magazine, November 2013 ***** (Vol 54)

"I can't imagine more beautifully long-breathed phrasing than oboist Masamitsu San-nomiya's. But eclipsing all else is the aria that follows, its tenor weaving Bach's logical counterpoint into unison strings and bass...all bathed in the ethereal acoustic of the Kobe Shoin Chapel. I would buy the disc for this alone." BBC Music Magazine, December 2011 ***** (Vol 49)

"From a musical standpoint, too, this issue stands out, with three breathtakingly original cantatas from 1724-5. The crowning achievement here is Jesu, der du meine Seele (BWV 78 which is wonderfully sustained throughout in every minute detail. Yukari Nonoshita (soprano) and the excellent Canadian countertenor Daniel Taylor offer a sparkling and vital account of it... Bass Peter Kooy sings his single aria... with authority... Tenor Makoto Sakurada makes a generally favourable impression..." BBC Music Magazine, November 2004 ***** (Vol 25)

"Brich dem Hungrigen dein Brot (BWV39) is a masterpiece of this changing landscape. Beauty however abounds in this genial reading - as it does in the only marginally less ambitious chorus of BWV187. In this latter score, no one could convey the gallant sweetness of the alto aria, "Du Herr, du krönst allein", with more "unction and blessing" (to quote the translation here) than Robin Blaze." Gramophone Magazine, January 2010 (Vol 45)
"the final duet-cum-chorale [of BWV49] is irresistable, with its alluring buoyancy heightened by Suzuki's natural, unforced direction...Robin Blaze is on particularly fine form...Suzuki never courts the visceral edge of John Eliot Gardiner, but he has a flawless integrity, the glorious SACD sound adding a halo of its own." BBC Music Magazine, April 2012 ***** (Vol 50)