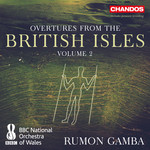 Rumon Gamba and the BBC National Orchestra of Wales present the second volume in their exploration of rarely heard overtures from the British Isles.

Introducing these neglected works, the conductor explains: 'All the overtures on this disc belong to the period between 1890 and 1945. In this present selection, however, we see perhaps even more clearly the evolution of musical style, and in particular the use of harmony, in the armoury of the British composer.'

He adds: 'Rather by accident it seems that we have a nautical theme running through the disc ('Rule, Britannia!' makes an appearance in two of the overtures!), perhaps the most familiar work being Walton's Portsmouth Point. I was surprised to find out that there are relatively few recordings of this little masterpiece. Likewise I was amazed to learn that the BBC National Orchestra of Wales had not played the piece for many years. So it made a perfect maritime choice alongside Britannia, The Boatswain's Mate, Plymouth Hoe, and Tom Bowlin.'

"An outstanding aspect of this release is the quality of the accompanying notes by Lewis Foreman and Rumon Gamba. Sound is characteristic Chandos, which means fine indeed. The BBC National Orchestra of Wales play idiomatically and enthusiastically. This is thoroughly recommendable for any lover of British music." (MusicWeb June 2016)

"This most welcome second volume of British overtures serves to accentuate the sheer diversity of works this country produced in the genre between the 1890s and the 1940s and, moreover, where the lines of delineation between 'serious' and 'light' were blurred" (Gramophone)