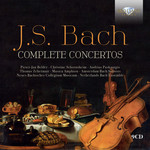 This 9 CD set contains the complete solo concertos by Johann Sebastian Bach: the Brandenburg Concertos, violin concertos, keyboard concertos for one, two, three and four harpsichords and the triple concerto.

As an attractive "bonus" two CD's are included which contains concerto reconstructions, for oboe, oboe d'amore, oboe and violin and 3 violins. In some cases Bach wrote an arrangement for another solo instrument of an
existing concerto of his (or by other composers, such as Vivaldi and Marcello). The original concertos are often lost, and these are reconstructed by present day musicologists and musicians.

A bargain set of Baroque favourites!