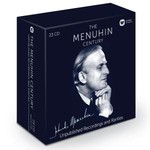 As a musician, as a man of ideals, and as a true world citizen, Yehudi Menuhin made an extraordinary mark on his era. The Menuhin Century celebrates the 100th anniversary of his birth on April 22nd 1916. Focusing on material completely new to the catalogue or new to CD, Unpublished Recordings and Rarities spans more than five decades and includes Menuhin's first European recordings, made in 1929.

(Comprising unpublished recordings and recordings never before released on CD by EMI or Warner) CD1: With a spoken introduction from the violinist himself - in English, French, and German - this is the first record ever made by Menuhin in Europe: The 13-year-old recorded no less a work than Bach's unaccompanied Sonata No 3 in C, one of the most complex in the violin repertoire; the result is miraculous. The CD concludes with Menuhin's first recording of a concerto: Bruch No. 1 with Landon Ronald conducting (1931).

CDs 2-4: Recordings made between 1932 and 1945. Menuhin was the greatest star in the musical firmament, appreciated by a huge audience. Many major recordings from this period have nonetheless remained unpublished until today - such as some alternative versions of Bach's unaccompanied sonatas and partitas --or appear here for the first time on CD (Wieniawski's Scherzo Tarantella, 1932, Tartini's 'Devil's Trill' sonata, Ravel's Kaddisch, 1936, and many virtuoso showpieces),

CDs 5-10: Postwar recordings to 1960. Featured here are many important recordings that are new to CD: Lalo's Symphonie espagnole with Fournet, Bruch's Concerto No.1 with Munch, Brahms' three Violin Sonatas with Kentner, and above all, an astonishing version of the Tchaikovsky Concerto with Boult, edited specially for this edition by Bruno Monsaingeon.

CDs 11-22: If the younger Menuhin played like an angel, here life experience has left its mark, imbuing his playing with an intensity and humanity shown by few other musicians. These CDs include such important recordings as: Schubert's String Quintet in C and Octet, published for the first time in this set; Mozart's piano quartets; works by Viotti, Corelli, Bach etc.