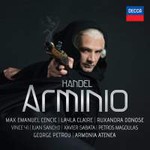 Described by one contemporary commentator as "a miracle", and another as "in every respect excellent & vastly pleasing", Arminio is ripe for reappraisal and new presentation.

An heroic story, based on historical events occurring on the Germanic fringes of the Roman Empire, Arminio is now being revived in a new and ravishing production by Parnassus Arts under their artistic director Max Emanuel Cencic: a combination with an unequalled track record in Handelian opera seria, as witnessed by their multiple-award-winning staging and recording of Alessandro (from 2012 to date).

Joined by the dynamic Armonia Atenea under the baton of George Petrou, Arminio is sure to join a fast-growing collection of acclaimed Baroque opera recordings. In recent years Max Emanuel Cencic has become recognised as one of the world's supreme countertenors: "Mr. Cencic is blessed with the finest countertenor voice of our day" (Opernwelt)

"The writing for Arminio is especially strong, and Cencic makes the most of it, sustaining a rich, beautifully rounded tone through even the most athletic numbers . . . his voice offers a lovely middle-ground between Xavier Sabata's darker tone as Tullio and Vince Yi's feminine, silvery-bright Sigismondo . . . [Juan Sancho has] a brilliance and a ring on the top of his tenor that speaks of "bel canto" to come. His Varo is passionate and vital, a worthy opponent for Cencic's Arrninio. Magoulas, George Petrou's bass-of-choice, is another find, and his "Fiacchero" sets the tone for a performance that balances agility with weight and heft . . . Ruxandra Donose is luxury casting as Ramise, fiery and full-toned. Petrou's direction keeps the drama moving, animated by clean articulation from Armonia Atenea . . . On balance, this "Arminio" is probably now the best out there." Gramophone May 2016

" [vocal delights abound in the riches of "Arminio"] in a luxuriously cast recording conducted with precision by George Petrou. Max Emanuel Cencic stars with his customary accomplishment and more vocal colour . . . Listen to his two Act II arias to hear his differentiation of tone and mood. He is accompanied by the sparkling soprano of Layla Claire . . . Xavier Sabata's voice has an even smoothness, and Vince Yi once again astounds with vocal sweetness and purity" Opera Now