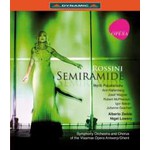 The composition of Semiramide took approximately four months, which is an unusually long span for Rossini. The premiere took place on the 3rd of February of 1823. The opera's libretto is based on Voltaire's drama Sémiramis, written by the French philosopher and scholar in 1748. For some respects a conclusive work, Semiramide contains, like all masterpieces, traditional elements alongside innovative ones. Rossini accentuated the role of the orchestra, compared to his previous serious operas: the Sinfonia, the longest and most elaborate Rossini ever wrote, immediately suggests Rossini endeavoured to give the instrumental part a more important role yet than usual. At the same time, the bel canto dimension is probably more developed than in any other previous Rossinian serious opera. Indeed, even recently, the difficulty of finding interpreters up to tackling Rossini's vocal writing, often prohibitively difficult, has contributed to the few and far between performances of this masterpiece. The role of Semiramide calls for a singer with qualities both of dramatic and coloratura soprano; bel canto agility is, in any case, required of all the main interpreters of this opera. This is a "huge" opera from all points of view. It summarizes and completes Rossini's serious arc, and is paradigmatic of all that would follow.

"The greatest star of the recording is Alberto Zedda himself...[Papatanasiu's] command of the role is exceptional, showing compelling technique, arresting stage presence and glowingly beautiful voice...Every bit as good is the exceptional Arsace of Ann Hallenberg. Perhaps even more than Papatanasiu, she has the full measure of the bel canto style and technique required to succeed in this sort of repertoire" (MusicWeb)