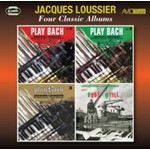 AVID Jazz here presents four classic Jacques Loussier albums, including original LP liner notes on a finely re-mastered and low priced double CD.
"Plays Bach Volumes 1, 2 & 3"; "Jacques Loussier Joue Kurt Weill"
Following in the footsteps of the renowned guitarist Django Reinhardt who had experimented with putting the swing into classical music before the war, here we present the French pianist and arranger Jacques Loussier with three volumes of his celebrated series, "Play Bach". Accompanied as ever by Christian Garros on drums and Pierre Michelot on bass, Loussier shows us just how suited to the jazz idiom the music of the great classical composer was! Alongside the three "Play Bach" volumes we present the hard to find album "Jacques Loussier joue Kurt Weill" an album only released in France and up to now unavailable on CD!
All four albums have been digitally re-mastered