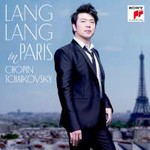 Lang Lang & Chopin have long been a winning combination, with the 2012 release of The Chopin Album being his most successful Sony album to date. Already celebrated worldwide for his Chopin interpretation, Lang Lang selects the four virtuosic and well known "Scherzi" to display his interpretative ability and renowned technical command.

This new release, Lang Lang in Paris, also champions the rarer Tchaikovsky "Seasons". Tchaikovsky has also featured prominently in Lang Lang's career - most notably in his international breakthrough at age 17 performing Tchaikovsky's first piano concerto at Ravinia's "Gala of the Century" with the Chicago Symphony Orchestra.

Having performed this recital programme all over the world, Lang Lang felt it was the right time for him to record it in Paris - a city he loves & feels at home in.

"Tchaikovsky's The Seasons is given a highly engaging performance. Lang Lang clearly loves this music. Such is its tender songfulness in Lang Lang's hands and his sensitive response to Tchaikovsky's harmonies, allowing them room to unfold their own expressive narrative." (BBC Music)

"With December's evocation of Christmas sympathies, I found myself waving a tearful goodbye to a quite enchanting survey of these harmonically rich and melodically captivating pieces." (AudAud.com)

"Highly recommended for those who loved the Chopin Album, and evidence of continuing worthwhile work from one of the world's most popular classical artists." (AllMusic.com)

"Lang Lang fans will find plenty to enjoy here and this is sure to be a popular release...there is indeed something magnetic about these performances." (MusicWeb)

Tchaikovsky:
The Seasons, Op. 37b