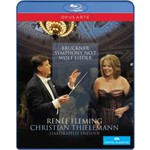 The Dresden Staatskapelle has a living Bruckner tradition, stretching back a century and more, which is lovingly curated by its new music director, Christian Thielemann, who is himself a powerful advocate for the composer's symphonies as the pinnacle of the Austro-German tradition; and in particular for the Wagnerian resonances of the Seventh, whose Adagio was shaped by news of Wagner's death in Venice. Hugo Wolf was also deeply affected by that news; his songs, like Bruckner's symphonies, can be seen as oblique reflections on the influence of Wagner, especially when sung, as they are here by Renée Fleming, with the utmost delicacy and intimacy.

Both Thielemann and Fleming are renowned interpreters of Romantic repertoire.

Wolf was a great admirer of Bruckner and both idolized Wagner, whose influence is felt in the 7th Symphony.

"Thielemann's interpretation of Bruckner's Seventh Symphony is majestic and clean, as expected, though it falls just short of the cumulative power that the audience's warm reception suggests. The camera's close scrutiny underlines how minimal his conducting can be." (BBC Music)